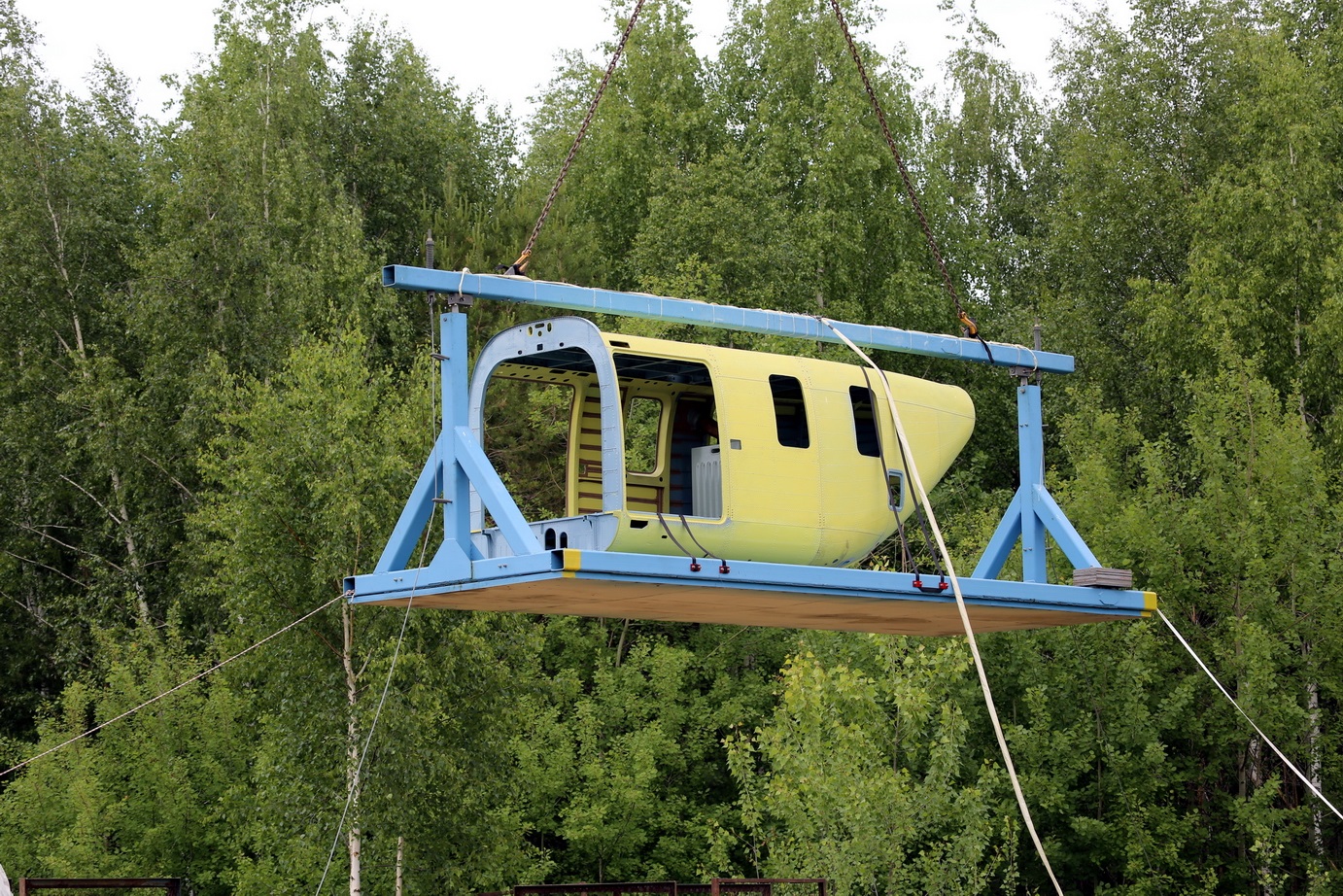 The Kazan Helicopter Plant tested the fuel tank by dropping it from a 15-meter height.

The Russian Helicopters holding of the Rostec State Corporation has successfully tested the additional fuel tank of the Ansat helicopter for resistance to destruction during an emergency landing. Certification tests were carried out at the Kazan Helicopter Plant - a container filled with a contrast liquid was dropped at a height of 15.2 meters. Such works were held for the first time in Russia.

A special platform was made for testing at Kazan Helicopters. A fragment of the Ansat helicopter fuselage with an additional fuel tank installed inside the passenger cabin was dropped from a height of 15.2 meters. A contrast liquid was poured into it: the main criterion for the success of the tests was the absence of a leak.
An additional 195-liter fuel tank will increase the helicopter's flight range by 140-150 km - up to 650 km. This option will be in demand when making long-distance flights. For example, when it is required to deliver a helicopter to a permanent base, as well as in an air ambulance to evacuate victims. In parallel, work is underway to modernize the main fuel system, as a result of which the maximum flight range of the helicopter will increase to 800 km.
“We began to prepare for tests in 2020 and tried to maximally focus and develop all the relevant competencies at Kazan Helicopters. A lot of work has been done jointly with specialists from the certification center of the State Research Institute of Civil Aviation, Aviaregistr and Rosaviatsia. I would like to note that earlier certification tests of accident-resistant fuel systems for helicopters were carried out abroad. The tests carried out at our enterprise were recognized as successful, we managed not only to create an accident-resistant additional fuel tank for Ansat, but also to master a new type of test work, ”said Aleksey Garipov, Deputy Managing Director - Chief Designer of OKB Kazan Helicopter Plant.
The discharge was preceded by a number of certification works: puncture tests of the flexible tank shell, pressure tests, ground and flight tests of the Ansat helicopter with an additional fuel tank. According to their results, changes were made to the design. For example, after puncture tests, the number of layers of fabric was increased and the way they were laid was changed. In addition, bench tests for splashing and vibration, as well as static tests of an additional fuel tank, were carried out in the testing laboratory of KNRTU-KAI(Kazan National Research Technical University named after A.N. Tupolev - KAI).
To date, most of the bench certification tests have been carried out, as well as ground and flight tests of the Ansat with an additional fuel tank. Evidence-based documentation is being prepared.
An additional tank will fit inside the Ansat passenger cabin. Its installation is possible in passenger and ambulance versions of the helicopter. It also provides for retrofitting of helicopters in service. This will require minor modifications to the aircraft.
Russian Helicopters Holding (part of Rostec State Corporation) is one of the world leaders in the helicopter industry, the only helicopter developer and manufacturer in Russia. The holding was founded in 2007. The head office is located in Moscow. The holding includes five helicopter plants, two design bureaus, as well as enterprises for the production and maintenance of components, aircraft repair plants and a service company that provides after-sales support in Russia and abroad. The buyers of the holding's products are the Russian Ministry of Defense, the Russian Ministry of Internal Affairs, the Russian Emergencies Ministry, other government customers, Gazprom Avia and UTair airlines, large Russian and foreign companies.
State Corporation Rostec is one of the largest industrial companies in Russia. It unites more than 800 scientific and industrial organizations in 60 regions of the country. Key areas of activity are aircraft construction, radio electronics, medical technologies, innovative materials, etc. The corporation's portfolio includes such well-known brands as AVTOVAZ, KAMAZ, UAC, Russian Helicopters, UEC, Uralvagonzavod, Shvabe, Concern Kalashnikov and others. Rostec actively participates in the implementation of all 12 national projects. The company is a key supplier of Smart City technologies, is engaged in the digitalization of government, industry, social sectors, and is developing plans for the development of 5G wireless communication technologies, the industrial Internet of things, big data and blockchain systems. Rostec is a partner of the world's leading manufacturers such as Boeing, Airbus, Daimler, Pirelli, Renault and others. The corporation's products are supplied to more than 100 countries around the world. Almost a third of the company's revenue comes from the export of high-tech products.
Tags helicopter rostec the russian helicopters the kazan helicopter plant kazan helicopter plant
PREVIOUS POST

Tatneft bought the largest manufacturer of plastic containers in Russia.