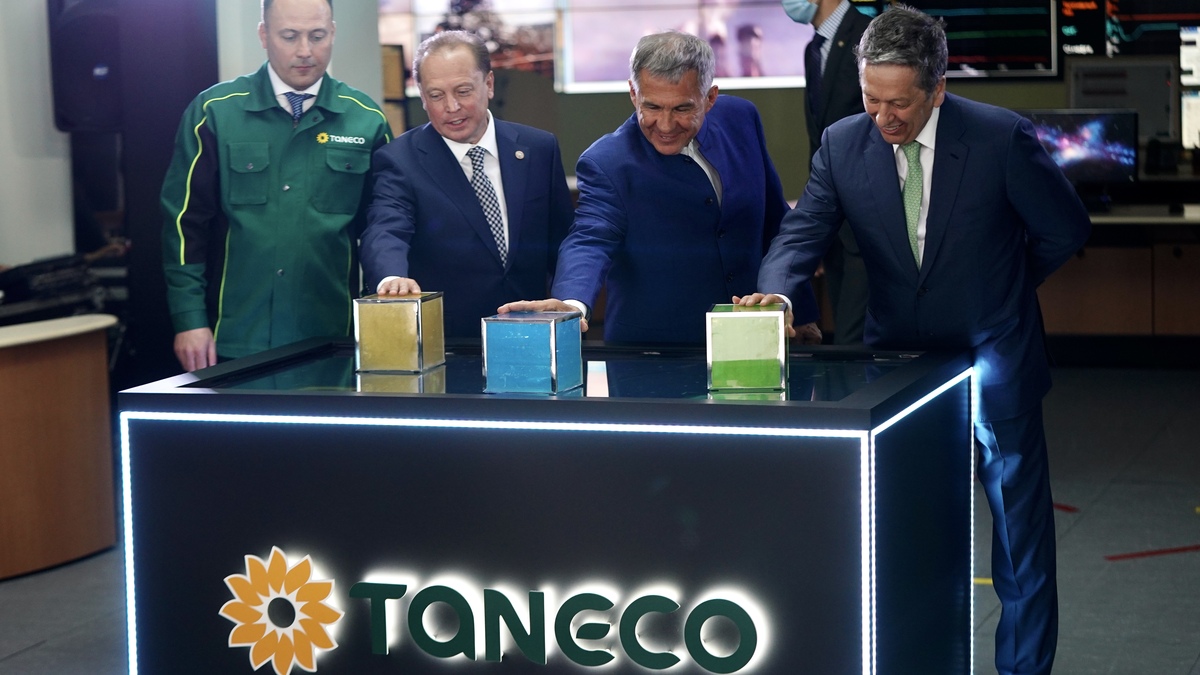 The ceremony at the TANECO oil refining complex in Nizhnekamsk was held with participation of Rustam Minnikhanov, President of Tatarstan, and Nail Maganov, General Director of TATNEFT.
TATNEFT provided orders for factories in almost twenty cities of Russia: in Kazan, Bugulma, St. Petersburg, Ufa, Izhevsk, Volgograd, Yekaterinburg, Taganrog, etc. during the construction of new units. 95% of the equipment used was of domestic production. The total investment in three new production facilities exceeded RUB 31 billion.
In aggregate, there were 21 units commissioned at TANECO since 2010 with the design capacity of the oil refining complex amounting to more than 15 million tonnes per year.
The catalytic cracking unit is capable of processing over 1 million tonnes of heavy oil feedstock annually into a high-octane component of EURO-6 motor gasoline grades. The unit yielded products also include light gas oil (feedstock for EURO-6 diesel fuel) and liquefied hydrocarbon gases (propane-propylene and butane-butylene fractions).
The launch of the unit will increase the production of gasoline by 545 thousand tonnes up to 1.6 million tonnes per year, as well as EURO-6 diesel fuel production by 200 thousand tonnes per year up to 5 million 800 thousand tonnes per year.
The new hydrogen production unit, the third in a row at TANECO, will provide hydrogen for the second stage of the Complex required for many production processes. In particular, it’s the application thereof in the hydrotreating process increases the environmental friendliness characteristics and the total volume of fuel produced. The launch of the new unit opens the opportunity for TANECO to maximize the existing capacities of the refinery and provide the potential for further expansion of the Complex.
They have also started industrial production of lubricants at TANECO: motor, transmission, hydraulic and other oils bearing the TANECO and TATNEFT brands.
At present, the production capacity of the enterprise is 22 thousand tonnes of lubricants, which can be increased to 60 thousand tonnes per year.
TANECO products correspond or surpass the best Russian and world analogues in terms of their consumer properties, which has been confirmed by the world's leading car manufacturers.
The low pour point of the TANECO and TATNEFT motor oils provides for the easy engine start at subzero temperatures. The scale formation is reduced at the expense of the thermal-oxidative stability, while the low volatility reduces the frequency of oil refills. The service life of oils under severe conditions is 1.5 - 2 times longer than that of mineral oils.
Rustam Minnikhanov, President of the Republic of Tatarstan, Chairman of the Board of Directors of PJSC TATNEFT:
“We have launched three units costing RUB 31 billion today. Those are huge investment projects that will significantly improve the economy of the Oil Refining Complex. TANECO is a state-of-the-art world-class refinery that will ultimately process 15-16 million tonnes of oil per year with a refinery yield of 98 percent.
This is a huge scope of work, which was first and for most performed by Nail Ulfatovich Maganov, as the Company’s General Director, and by the entire team of designers, scientists, technologists, and builders. Thank you very much for the great results!"
Nail Maganov, General Director of PJSC TATNEFT:

“Our complex is a synergy of the cooperative work of the entire Russian industry. We are proud that we use the equipment from domestic manufacturers and continue to build up unique competencies for the country. We have once again proved that together we can and are ready to build high-tech turnkey production facilities anywhere in the world. All this is done with the assistance of the federal center and the Republic of Tatarstan. Our plans are no less ambitious. In the 21st year, The plans provide for launching four more new facilities: a gas fractionation unit, a pilot industrial hydro-conversion unit, as well as a delayed coking and an iso-dewaxing units for diesel fuel production.

From July 1 to July 3, the international agro-industrial event Agvolga 2021 will take place in the city of Kazan.