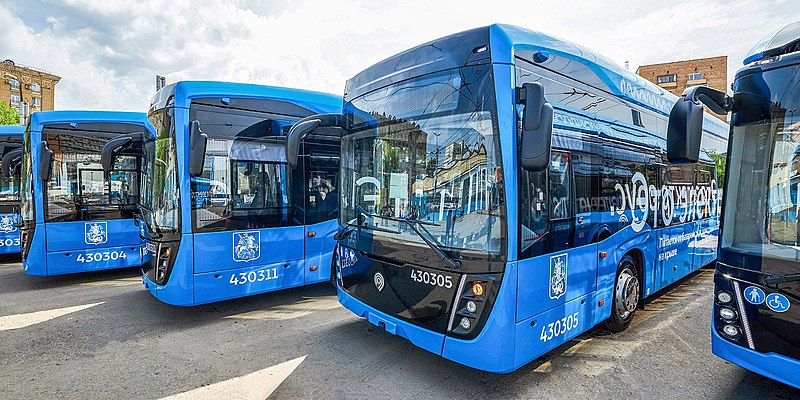 On April 27, an assembly plant for KAMAZ electric buses was opened at the Sokolniki Carriage Repair and Construction Plant. The event was attended by Moscow Mayor Sergei Sobyanin and General Director of KAMAZ Sergei Kogogin.

The opening of an assembly plant for KAMAZ electric buses at the Sokolnichesky Carriage Repair and Construction Plant is part of a large program to replace the bus fleet in the capital. The old vehicles in the capital will be replaced by electric buses. As Sergei Sobyanin noted, the Moscow authorities have practically stopped purchasing diesel buses.
"Such a revolutionary story that improves the environment, new technologies, a future for transport" not only in Moscow, but also in the world. Today, Moscow's electric bus fleet is the largest in Europe. And we will increase and increase our volumes every year, ”said Sergei Sobyanin.
One of the shops of the Sokolniki Railway Car Repair and Construction Plant was modernized for the assembly of up to 500 electric buses per year. The cars themselves, as before, come to Moscow from Neftekamsk on special trawls. In Sokolniki, their equipment continues. At the second stage of production development - until 2023, one more workshop will switch to assembly at the enterprise, producing plus 200 electric buses per year.
“The Moscow Government has a clear plan to replace diesel buses with environmentally friendly vehicles. The new production site accounts for 40% of all assembly operations. These are high-tech and the most expensive operations - from the installation of doors and interior trim to the installation of the "brain" of the electric bus - the central software. This is 60% of the production cost of an electric bus. Most of the taxes from the production of electric buses will go to the Moscow budget - this year KAMAZ will transfer to the city about 60 million rubles. A large production facility in the capital ensures the creation of 100 high-tech jobs, which will double by 2023, ”said Maxim Liksutov, head of the Department of Transport and Development of Road and Transport Infrastructure in the capital.
The first electric buses assembled in Moscow will go on the routes in May. The organization of the production of electric buses in the capital will shorten the delivery time, assembly and maintenance of transport and will save on logistics.
The electric bus KAMAZ-6282, designed according to the terms of reference of Mosgortrans, is one of the most high-tech products of KAMAZ. The launch into serial production of a fundamentally new type of passenger transport in 2018 became one of the milestones in the development of the company. The team of KAMAZ PTC managed in a short time to organize the production of such an innovative high-tech product as the KAMAZ-6282 electric bus, which has no analogues in the world.
As a reminder, in May 2018, KAMAZ won a tender for the production and supply of 100 electric buses and ultra-fast charging stations for Mosgortrans. In 2019, the auto giant won another tender and delivered 100 electric buses and 36 ultra-fast charging stations to Moscow. In 2020, KAMAZ signed a contract for the supply of 200 electric buses to GUP Mosgortrans - it has become the third in cooperation with the megalopolis and the largest in the history of the company. By the end of the year, the company had successfully completed its obligations. As part of the next contract, 200 KAMAZ electric buses were handed over - the largest batch of electric buses in Russia was sold. With this company there will be full functionality of the rolling stock within 15 years from the date of delivery.
In total, since September 2018, 400 KAMAZ electric buses and 69 charging stations have been issued at the Mosgortrans address.